A few hours back I was truly happy and excited knowing that after the next few hours I would be able to upgrade my Samsung Galaxy S II GT-I9100 from Gingerbread into the latest (stable) Android 4.0 Ice Cream Sandwich operating system – then it died. It was all over the Internet and all of the Samsung Galaxy S II GT-I9100 like me were admittedly that “excited” to be informed that the promised Android OS update will be received after a few hours. The information was even shared globally and all of the people around the globe seems like waiting enviously to the the “soon” reviews and boastful social updates that they already got the Ice Cream Sandwich operating system update. Too bad, nothing was actually true about it. 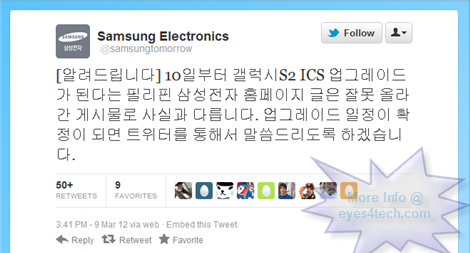 Let you know that the upgrade from 10 Galaxy S2 ICS Samsung Electronics website Filipino ascended to the post wrong article are not true. Once the upgrade schedule is confirmed through twitter let me.

The above image was twitted by Samsung Korea (@samsungtomorrow) simply saying that none of the initial reports or information which happened to have spread globally/internationally is actually WRONG or officially not true. Disappointed? Well, I can feel your disappointment as I also have been waiting for this update.  So there’s no “Galaxy S2 ICS Upgrade” really that we should expect today (Saturday) since there’s nothing really to expect.

Well there’s nothing that we can do about it, really. But I do hope that any reports or Press release especially from a company should be firm and factual that when they say that they are going to build or release on a certain date – then it should be a hard fact and not just another story – being responsible.

I just do hope that the next time we hear something like “official Galaxy S2 ICS Upgrade” spreads, then I hope that it’s for real.