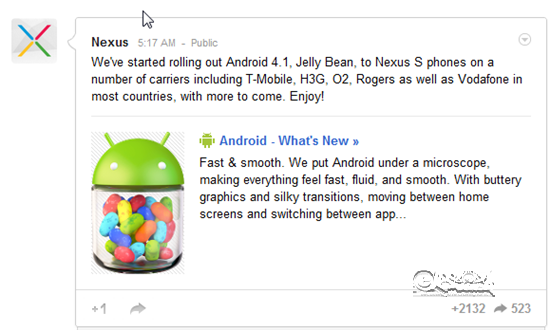 The project was actually called Project Butter.  This is the concept used for you to feel that buttery and silky feeling while moving applications, swiping between home screens and also when switching between Android apps.  If you recall, Samsung Galaxy Nexus was the first smartphone to receive the Android 4.1 Jelly Bean update and now Nexus S comes next.  Rumors says that HTC One smartphone series will also get the same Android update unfortunately there were no reports as up-to-date when will this happen.

There are no reports yet when will be the Android 4.1 Jelly Bean update will be available to all carriers and globally.  This is something I understand somehow because each carriers needs to test if it will be compatible with their network.  So, if you happen to own a Nexus S smartphone I suggest you check now your phone and try now the latest Android operating system.  For more information on what’s inside the new Android 4.1 Jelly Bean update, check it from Google Android.