Finally, after the official announcement and release yesterday of the most awaited Rovio’s Angry Birds Space game for iPhone, iPad, Android, PC Desktop, and Mac I was able to get my fair share when I downloaded and install it on my Android smartphone – Samsung Galaxy S II.  And I should say that if you are into Android devices and you wanted to download this addictive game then you are so lucky like me because the Angry Birds Space for Android release is FREE unlike with the version released for iPad, iPhone, PC Desktop, and Mac.  But the game isn’t that pricey, well except for the PC Desktop version which will cost you €5.95 per download of the full version of the game. But you can still enjoy and try the game by downloading the demo version. 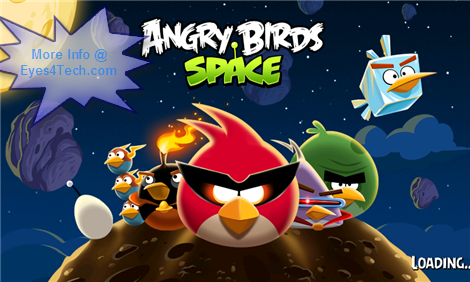 The evolution of Angry Birds Space started while the whole gang were resting and looking after and tending to their precious eggs.  When all of the  sudden a wormhole opened in the sky and came out a weird icy looking bird and landed to where they are. Not too soon after that a giant robotic claw came out from that same wormhole and grabbed their eggs. Of course, they had to chase this claw which kidnapped their eggs by going through to that same wormhole. While on that wormhole, these birds were transformed gaining new powers and when they came out from that hole, these Angry Birds find themselves floating on a new galaxy. – That’s where the story begins!

My first impression about the game – speechless. I was truly amazed with the new looks and feel of Angry Birds Space for Android. The soundtrack used is quite futuristic. The birds, you’ve got to love those birds.  Although the same characters are still there with their own distinct functions to the game, their looks have been upgraded to match the theme of the game – cool and futuristic. Some comments say that they all look like some characters from the comic Justice League. 🙂

The whole Angry Birds Space game are divided into four (4) stages and on each stages you will surely enjoy each puzzle games packed within.  Here is the layout of the game. 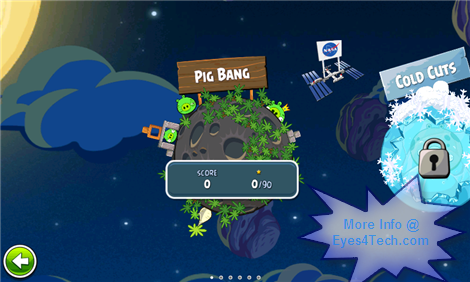 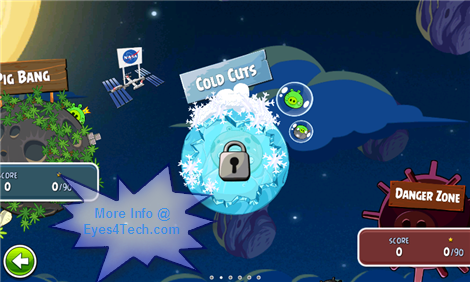 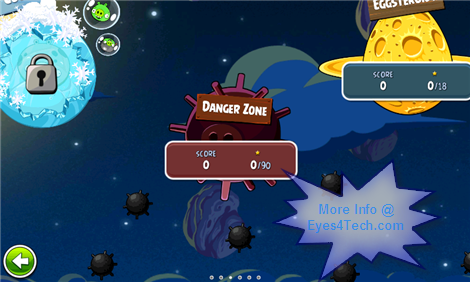 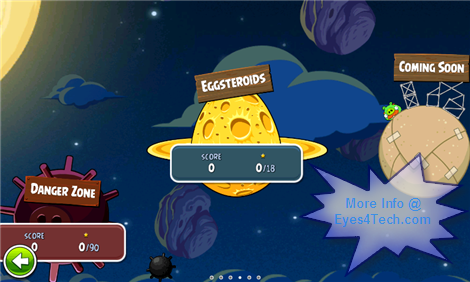 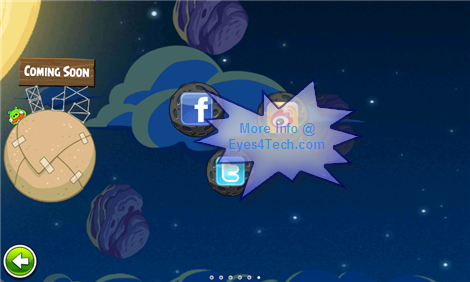 Well, I am still on Pig Bang and so far I am enjoying each puzzle game and they are far different from the previous iterations or releases of Angry Birds. That feeling when you see a spaceship that moves slowly in the outer space and then zoom fast when it touches Earth’s atmosphere. The strategy now here is not about straight angles anymore but rather a combination of straight angle calculations and circular motions if you want to hit those space pigs. You will also need to learn how to utilize those exploding birds by hitting some space rocks in order to hit your targets. There’s more about this game that I still need to explore since I am still on the first set of puzzles. But so far I am pretty sure that this game will surely become another massive hit in the next few days. 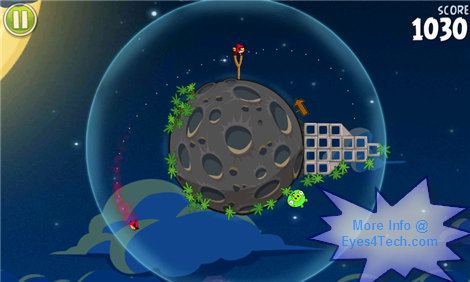 I have one wish though for Rovio, the current trend now of games (not only for Android but also for iOS devices like iPad and iPhone) is for them to have a button where you can boast your score to Facebook or Twitter. 🙂

If you want to download Angry Birds Space for your Android, iPad, iPhone, PC Desktop, or Mac – check my previous post here.