It is official although quietly done by Apple, the new iPad also known as the iPad 3 will be now be landing and will be available to the Philippines and Guam this 29th of May.  Well, it is about time that the new iPad shows up here in Asia as most of the people here have been waiting to experience that Retina display with 5MP iSight  camera tablet – at least before the release of the new iPhone 5.  However, I am not quite sure about that Ultrafast 4G LTE if it will really work here in the Philippines. 🙁  I mean 3G visibility isn’t that stable yet and now with 4G coming in, well I am not that yet confident. 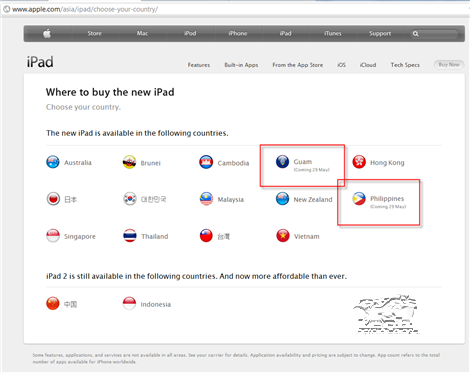 Apple didn’t made any press release about the plan of shipping the new iPad (also known as iPad 3) to the Philippines and Guam. But if you go to Apple Asia Where To buy the New iPad official web page, you will see a caption below countries Guam and the Philippines with a date that the new iPad will be available in these Asian countries on May 29. Well, from Apple’s recent revenues it shows that Asia is one of the new booming markets that is quite performing well in terms of sales – Philippines is one of them.

In the Philippines, there are going to be three main sources where you can score the new iPad from Apple and that’s going to be – (1) Apple’s Online Store for Philippines, (2) via official Apple Authorized Reseller like MAC Centre, (3) and GLOBE Telecom. Yes, Globe Telecom did it again as it did it before with Apple iPad 2.  Howeveer, prices, packages and post-paid plans have not been divulged yet but I am pretty sure sometime between now and on May 29, Globe will release an official statement about the plans.

Apple’s the new iPad, soaring in sales and has no plan of stepping down that it has even already sold over 30 million units last March since it was officially released. This latest iPad iteration from Apple continues to bring money to Apple and it is still being considered as the best tablet computer in the industry.