Chitika, an online advertising network recently released a new insights report comparing the web traffic volume between Samsung Galaxy S III and iPhone 5. And the result shows that Apple iPhone 5 has surpassed Samsung’s flagship Android smartphone Samsung Galaxy S III. The data collected by Chitika was from their study using a user-agent analysis on millions of mobile ad impressions from 03rd of October – 09th of October. From that 7-day web traffic volume review conducted by the advertising network it shows that there are more consumers utilizing the fast browsing using the new iPhone 5 as compared with Samsung Galaxy S III.  For almost 4 months, since the latter was released in the US it has shown us all their competitiveness and remarkable sales. The most recent success of Samsung’s was they have been awarded as the “Phone of the Year” by T3. Nevertheless, Chitika’s data is simply showing us that there more Internet users using the new iPhone 5 versus the former.  Below is the web traffic volume comparing the two rivaling smartphones. 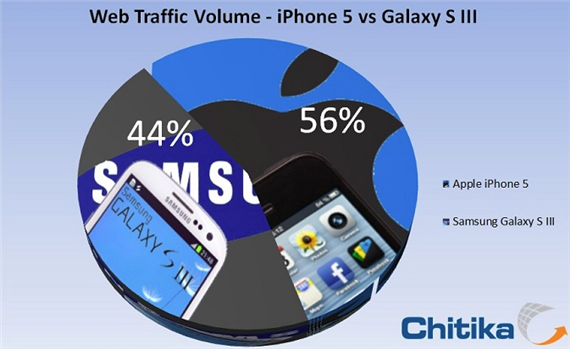 For Chitika, they believe that the new iPhone 5 reached it’s record-breaking sales and with the encouraging 4G data Internet speed – who wouldn’t love that, right?  But for Samsung, they still stand tall and they have been more aggressive now with their marketing strategies. What’s more, Samsung thinks that there are so many shortcomings and features that aren’t there in the new iPhone 5 as compared to their flagship smartphone.

Wireless Car Chargers & Many Things to Go Wireless in 2021

But is I am to ask you given the choice to pick only one device with the consideration of Chitika insights report, which one will you choose? Samsung Galaxy S III or the iPhone 5?