Flexible display OLED will put Samsung to the top.

Samsung flexible display OLED called YOUM is now the future display for all mobile technologies like smartphones, laptops and tablets. Or maybe Samsung will use this new technology. If you recall, this is not the first time that we’ve been hearing and seeing such futuristic and promising mobile products that plans to use this so-called flexible display OLED. This new technology was already introduced to us since year 2010. And from the recent CES 2013, Samsung is back showcasing the new flexible display OLED. The company presented how they were able to maximize the power and flexibility of the new OLED display. You can watch the video below of their presentation.

Back in 2010, Samsung already boasted their different new display technologies over at FPD 2010. From flexible display OLED, to transparent, and many more. You can read more about it from NetbookNews – A Look At Samsung’s New Display Technologies – FPD 2010. From there you will see that Samsung is serious about innovations.

Last year, Samsung already showed the world their plans of competing with Nokia’s Kinetic Display through their flexible display OLED – you can read more about it here: Samsung Phones With Flexible Display By 2012 – Battles Nokia’s Kinetic Display. And it looks like that the aforementioned company is pursuing on meeting this goal. They plan to maximize the power of this new technology and soon we’ll all see new innovated tablets and smartphones where you can actually fold and fits on your pocket or a rollable tablets through these magnificent flexible display OLED. 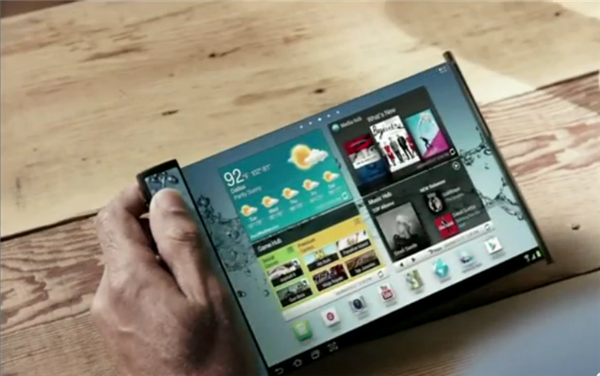 Many are now saying that if Samsung becomes successful with integrating the new flexible display OLED, it will eventually kick Apple’s iPhone, iPad or even the iPod Touch popularity from the market. It will no longer a battle of mobility and having a fast processor and how complex the smartphone or tablet’s can process data but also a more portable device where it fits your pocket and without worrying of breaking the display.

Do you really think consumer will switch from iPhone to Samsung if flexible display OLED becomes the new display for the future Samsung smartphones and tablets?