Who said that SMART will be the only one who’s getting 4G LTE upgrade? Wait until you hear the latest news from Globe Telecom’s Network Modernization plans. I received an email last night from a reliable source which is also one of the responsible group for Globe Telecom’s press conference to be held tonight at Makati Shangri-la, Makati City. The press conference is entitled “GLOBE TELECOM – HUAWEI – ALCATEL-LUCENT PRESS CONFERENCE ON GLOBE NETWORK MODERNIZATION”. Are you now getting the bigger picture of what will be discussed here? Do you know what’s so great about this press conference besides the point that it will be only about Globe Telecom’s plan to upgrade? It’s actually the deal made by Globe Telecom with Huawei working as their lead partner and end-to-end network solutions provider. While Alcatel-Lucent (ALU) was assigned as project manager and integrator. 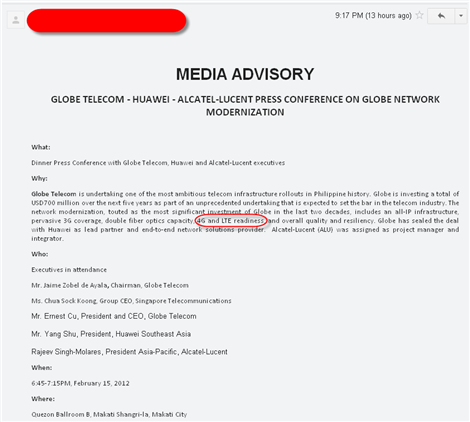 The press conference will discuss mostly the USD700 million investment of Globe Telecom for their five-year upgrade plan and setting once and for all a bar in the telecom industry.  The network modernization, touted as the most significant investment of Globe in the last two decades, includes an all-IP infrastructure, pervasive 3G coverage, double fiber optics capacity, 4G and LTE readiness, and overall quality and resiliency.

Hopefully I could get there on time because I am still probably at work during this event.