What does API stands for? API is an acronym for Application Programming Interface or can be described as a short code or application that can be used as an interface of your WordPress application or plugins that uses a third-party applications, libraries, or operating systems. A full explanation of API is available in WikiPedia.

10 Reasons Why A Blog is Important for Your Career

It is one of the most common problems of those bloggers or website owners who have more than one website to maintain, although not intentional, there is a great risk that they might interchange the API key from one of their websites and used it with the other. For some of the applications in WordPress such as Akismet, this is no biggie. However, if you’re using the same API there’s a possibility that you won’t be able to maximize the application and you won’t expect to get the exact data you’re expecting (i.e. for Akismet – if you’re using it originally for your Site A and used it also on your Site B, it’s possible that when you look into your Akismet Stat it’ll be the combination of the 2 sites). Another thing, it’ll be hard for you to activate your WordPress Stat when you entered the incorrect or used API.

Going back to my problem, I installed this plugin called WordPress Stat to see the traffic coming in to my new website and part of the activation process is to load an API key from WordPress, but the problem is I accidentally used the API key from my other website instead of getting a new one. I already tried the instructions from WordPress but I can’t seem to get around it. So what I did was to do it the way I know it – removing it straight from the database.

It’s not really that hard, all you have to do is access your CPANEL – oh yeah, I think I forgot to say this is only applicable for those website owners with their own domains – I accessed my phpMyAdmin. Take note of the incorrect API key you’ve entered initially and put it under the Search Tab like the image below. 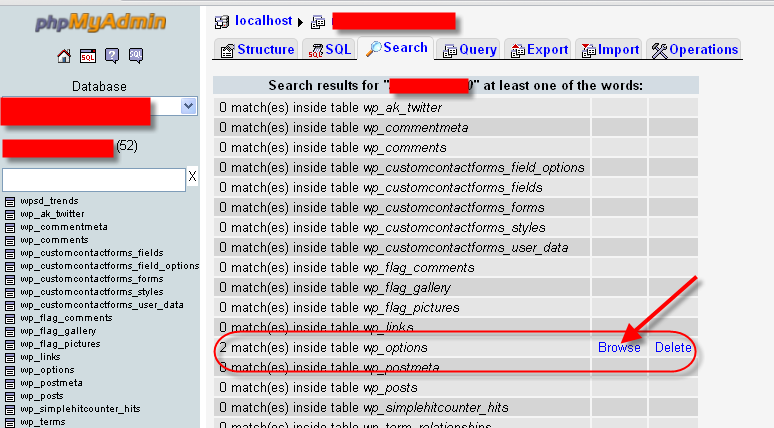 After you clicked on Go, this will initiate the search on all the tables from your database. The page will be refreshed with the results, notice the table wp_options will have entries on it.

Click on Browse. Mark the checkbox and press on the X or Delete option.

Now go back to your WordPress Dashboard and pull out again the page where you need to input the API key, you’ll notice that it will now again ask you to encode the new API key. All you have to do now is get a new one from WordPress intended for your new website or if you already have one, just encode it again and activate your plugin.