Compared to 2011, there are less rumors, face pictures and information regarding iPhone 5. On the other hand, the Internet is now flooded with more concepts. Since the concepts are not relevant, people get back to reality since most rumors present the same information and are quite connected one to another. In other words, they must come from some common sources, so there is obviously a solid reason to take them in consideration. Not all the ideas are authentic, but some of them do have a real connection with the reality, at least partially. 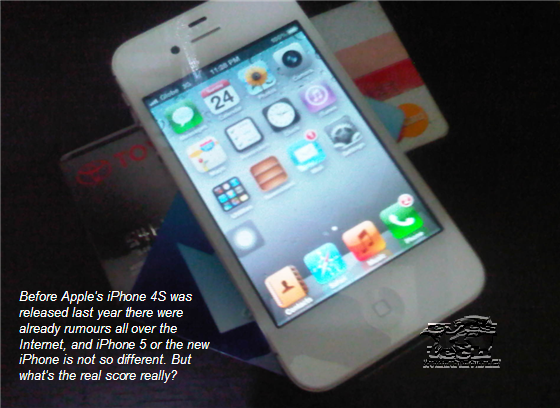 In 2012, most rumors about iPhone 5 present an interesting device with a 4 inch wide screen and a higher resolution. There are also a few changes in the design, but also in the positioning of specific ports. All in all, the general appearance is supposed to be the same. If you look at iPhone 5 or iPhone 4S from a distance, you will not notice any changes. But once you get closer, you will have no problems identifying the changes. According to some critics, 50% of such information are fake, 20% comes from the competition, 20% are released by Apple to increase the rumors and only 10% is the reality the customers will get to see.

According to some other sources, the new Smartphone is supposed to come up with an upgraded processor. They claim users will get a quad core Exynos 4 processor from the competition – Samsung. Therefore, Apple might join companies like HTC, Meizu, LG or Samsung in a world of multi core devices. This rumor is not necessarily affecting Apple, as multiple companies are getting ready to release quad core gadgets. It is almost a trend in the mobile industry, therefore, Apple may adopt it as well. Only time can tell the truth.

Some other information claims the amazing panel technology that may be first implemented in the new gadget will be reflected in a thinner appearance. Instead of using a multi layer display, Apple will deal with a relatively new technology – in-cell. Companies like Sharp or Toshiba are rumored to be the potential manufacturers. Reducing the number of layers will also reduce the gadget thickness and size, making it lighter and thinner.

Some other rumor talks about the official release date. It seems the Apple partners have some slight problems dealing with the batteries for the new device, but this issue doesn’t stop the analysts from affirming that the new terminal may hit the market in September, 2012. It seems the releases coming from the competition may be responsible for the release date. Samsung and Microsoft have come up with some major announcements, so Apple doesn’t want to lose the battle.

In the end, it seems that the first prototypes of iPhone 5 come with an integrated NFC chip. According to some experts, a log with hardware information has led to the conclusion that the popular NFC chips may come with the new gadgets. So far, Apple has refused to implement this technology in its terminals, but things may change in 2012.

Thanks for the tip Danny!

Danny is a technology enthusiast and loves to read technology blogs like this one. He is an internet security expert and works for web24.com from where you can buy SSL certificates.

Next Post Some Online Apps For Increasing Your Typing Speed