The world witnessed the first unveiling of the improved and enhanced portable gaming console Nintendo 3DS XL last June 2012 at E3 2012. And now, it is official that the new best game console has been released last week in the UK and price tagged at around £180. The reception of the new Nintendo 3DS XL seems to be going pretty well. And there had been some good reviews about this new portable gaming console – of course there are some negative feedbacks as well. The new Nintendo game console is not only considerably improved but also oversized and it looks like a power-packed portable gaming console. But I think size really does matter and you will appreciate more your game if you can see the images better and clearer. And by the way, this new 3DS XL goes and lives for its name – 3D enabled.  There are reports also that this new game console will soon be arriving at the U.S. sometime this month of August. 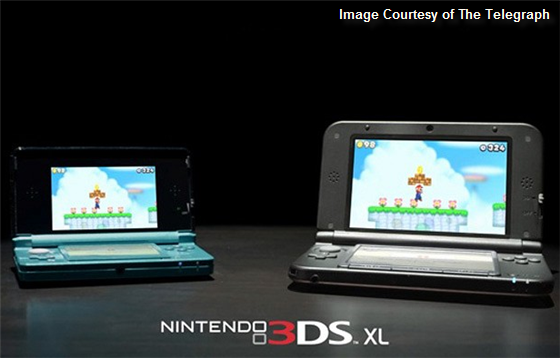 The new Nintendo 3DS XL as I’ve said is a little bigger with a screen display that measures at 4.88 inches with a resolution of 240×800 pixels (top) and 4.18 inches with a screen resolution of 240×320 pixels.  The game console has a 4GB SD card and it is said that the battery has also improved as compared with its predecessors.  And to give you some insights from the users who experienced using the new portable gaming console Nintendo 3DS XL, let us watch the video below.

To be perfectly honest I am not even sure if portable game consoles will still be such an eye-candy for most gamers. The reason behind my initial statement has something to do with the advancing capabilities of new smartphones and tablets. People love portable gadgets and as much as possible most of the tech consumers love and want something that has already everything on it. This is the concept of most smartphones and tablets nowadays whether it is an iOS or Android operated system.  These companies wanted to deliver a gadget where they can fully utilize and make our lives a little bit easier. Something that we can pick up from our own pockets and use it whether we need it for our work or entertainment – and of course the power to be used for communicating with other people.  I just do hope that with the release of the new portable gaming console Nintendo 3DS XL will help boost the company’s dying revenue.