MyMusicStore Philippines – an online music store in the Philippines was featured early this week. It is said that this is now the biggest online music portal in the Philippines. It’s an online music store where you can download your favorite music from either local or international artists. The main objective of this online portal music store is to give aid to the Philippine’s music industry by giving the people to pick their own choice of song and of course to minimize, if can’t be stopped, the never-ending fight against music piracy. Sometimes you wanted a song so much and when you visit your favorite record bar, the only way you can have this song is for you to buy the entire CD. You have to spend buying the CD wherein you only wanted one of the songs there – this is not practical at all.

I don’t want to expect too much on how their website works. Well, whenever I review a website I have my own checklist and so far here are the result after navigating around and download an actual song. However, don’t mind the song I have downloaded because it’s just a random song I picked – guilty! 🙂 Anyways, the first thing I look into a website is the user-experience or the whole look and feeling when you go to a certain website. The MyMusicStore’s website is simple, smooth, and clean. There are no intrusive ads, notifications and pop-ups. The menus are easy to navigate and you can easily find the genre you want. Now if you think you can’t find the song you want through their menu, you can try their search tool. You just need to type either the song title, album or artist’s name.

Before you decide to buy any of the songs of your choice, you can preview it first by playing a part of the song.  With this you can ensure that this is the song you want to buy and download from MyMusicStore. Well, as I’ve said they will only make you hear a part of the song so don’t expect to hear the whole song from the website.

The Cost per Song

The cost actually varies depending on the song that you will be downloading.  So far, while navigating around the website it looks like the price or cost per song varies from PhP 25.00 – PhP 35.00 for either local or international singers. 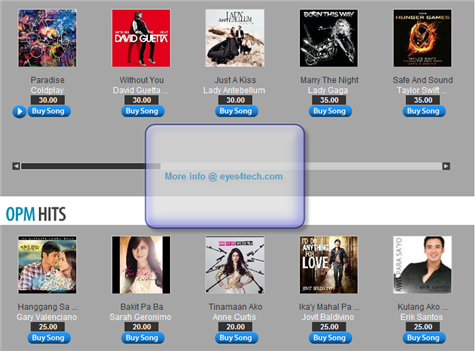 The Cart and Check-out

I have the chance to purchase and download a song from the MyMusicStore Philippines website myself. But before you can purchase a song you need to register first on their website.  You might also need to have a PayPal account for a more secured way of transaction – you will need to pay for the song before you can download it.  However, if you don’t opt to pay it through your Paypal account or if you don’t have one then you can choose to pay it through other ways.  You have the option to pay it through your Mobile phone (currently, I think Smart is the only option for now if you chose Mobile), Paypal, Credit card (but they will still ask you to create a Paypal account), and via Load  Central epins (coming soon). 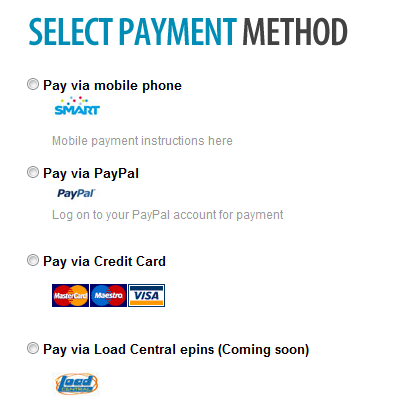 The download speed is pretty much acceptable, I can only say for myself since my Internet connection at home is 1Mbps so downloading isn’t that much of a problem. It only took me less than 2min to download a 4.22mb MP3 file.

Here are some of the screenshots I captured when I bought one song a couple of hours back.  I know it will be a little bit sluggish because I haven’t edited them yet.  Probably by tomorrow or I would be able to fix it.  Anyways, the cost of the song I downloaded from Jessie J entitled Rainbow was PhP 35.00. 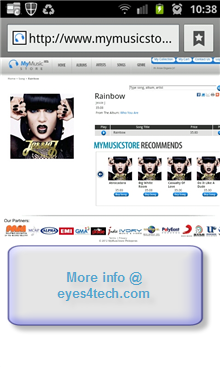 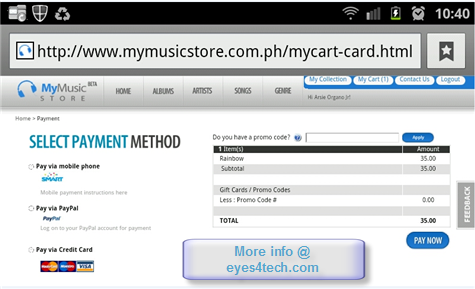 Here’s my final verdict.  The MyMusicStore Philippines online music portal looks promising and can really help to at least minimize piracy in the music industry and the songs are cheaper as compared when you buy the whole album from your favorite music bar and you only wanted one or two songs from it.  As for the look-and-feel, there’s more room for improvements like the web designer also needs to consider also those smartphone and tablet users browsing their Internet. It’s still not optimized for smartphone and tablet browsers and some of the frames are overlapping especially the “Feedback” part on the right side of the window. Another thing that they need to consider is to load some official videos and possibly lyrics.  Remember that this is the smartphone and tablet generation that we’re talking about and sometimes just a plain MP3 won’t suffice because there are times that people would rather watch the official video rather than listening to a song – this is the end of the jukebox era.  That’s the reason why there are so many people goes to YouTube just to listen to their favorite music and watch the official video along that song.

But will this really help to stop the so-called media piracy?  Since I came to know the use of MP3 back in the mid ’90s if I wanted to hear a song, I will just login to IRC and get it from a certain channel or used an alternative peer-to-peer application like Napster, Bearshare and many others.  Also you can convert an audio CD into MP3 and distribute it. It’s already more than a decade since I learned about these techniques and there are other ways to distribute a song in a form of MP3/MP4.  If you’d ask me, I don’t think so and even the government imposes a law about this I don’t think it will even work.  Internet is an open world of information where more and more people shares almost everything.  It’s not like a place where you can put a virtual police and follow each move you do. Of course there’s a way but with our current technology and infrastructure here in the Philippines – I don’t feel it can be done, maybe sometime in the future. But who knows… let’s see.

Go and visit MyMusicStore here and support them – link