You can now get and own a cheap yet amazing Android smartphone because Samsung Galaxy S III price dropped on Amazon Wireless giving you a huge discount. If you are an existing AT&T subscriber or you want to switch to this mobile carrier, you can avail now the new Samsung Galaxy S III for an amount of $179.99 (Upgrade) or $189.99 (New Account). That’s really a big discount from the original price of $699.99.  Last week, this Android smartphone’s price from Amazon Wireless was at about $99.99 for Samsung Galaxy S III 4G 16GB White and this week it is still discounted but the price has now been doubled – but still discounted. 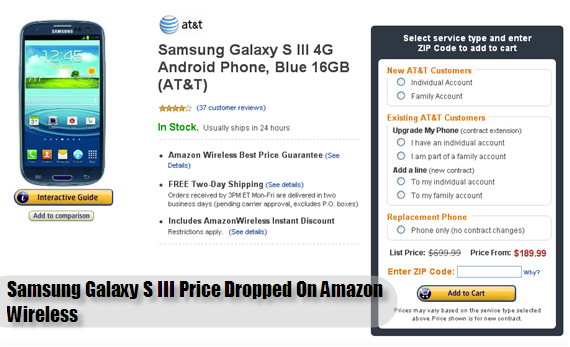 Last May was the unforgettable yet another glorious day for Samsung when they unveiled their new flagship smartphone Samsung Galaxy S III. And months later the sales and activation remains strong and it even hits the 20 million sales after its first 100 days. And with the recent release of Apple iPhone 5 in the mobile industry, we are now wondering who will win on the next revenue review among the two rivals in the world of mobile industry. You can also check my previous post about Samsung Galaxy S III Specs and Features when it was launched last May.