In a economy where people get everything right at their doorstep according to their convenience so why not beverages, this what Manish Hada and his wife Puja Hada thought while conceptualizing the idea of developing an ecommerce website which sells beverages named as BeverageWala. Who would have actually thought that beside various household requirements and other stuff one can even sell beverages to the customers? They both not only visualized this idea but actually gave this idea an existence in the real world. 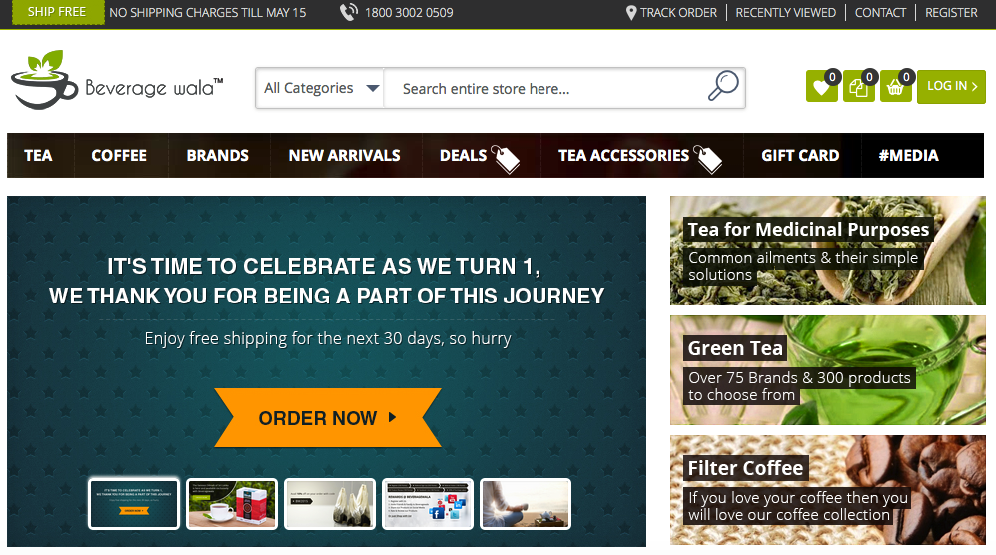 This is just a startup which commenced in April last year. Within a gap of just one year they have already catered to almost 3000 orders even though they have a small core member team consisting of both the founders and Sajal. Sajal looks after the purchased department. They basically put up in Gurgaon and also have a warehouse there itself.

They provide a variety of Tea and beverages. They are not limited to just Indian variety but also have a huge range of foreign brands as well. If we name a few brands one can recall Nescafe, Illy, Clipper, Basilur, Typhoo, Hintz, DavidOff Café, Bud white, 18 herbs, Golden tips and many more. Om the top of the website one can see a bar wherein offers on shipping are available. One can also create an account on the website which will hardly take a few minutes. The user can use various predefined filters for some specific search as well. They have options like recently viewed or newly added so the customer can keep a track on the latest additions. Right now they are celebrating their one year of completion they are offering free shipping for the one month i.e. May 2015.

They also provide teas and coffee of distinct categories like the tea for medicinal purpose, filtered coffee and Green tea. They have distinct sections which can be viewed easily. On the right of the website one can see links to various social networking portals so the users are always connected to this website and their updates. Users can also earn reward points by inviting friends to register on Beveragewala.

Then they have a section of popular brands. In this they show various products which are high in demand on their website. To keep up with the demands of the customers they also keep on adding new items in their beverage list. Till now they have almost 1000 products from around 90 Indian and foreign brands.

Though running these websites requires a large working capital but Beveragewala is really competent in doing so. For the past one year since its commencement, they have been self reliant. They are now aiming to get at least 1000 orders within this month itself. Though online portals like these are bound to get a tough competition from the online market as well as the offline stores, but they are slowly overcoming these difficulties and emerging as a potential competitor for them. Though right now they work quite manually now but soon as the demand will rise, they will shoot up their investment thereby expanding the scale of operations.

Previous Post All About Adoreshare Video Converter Genius for Mac