Samsung Galaxy Nexus being the world’s first Ice Cream Sandwich (ICS) device has finally landed here in the Philippines and Smart Communications is now accepting pre-orders of the said device. The pre-order of Samsung Galaxy Nexus from Smart started this Saturday 21st of January and should continue until the 27th of the same month (a 7-day pre-order promo). And if your application has been approved, you should be able to bring home your own Samsung Galaxy Nexus on the 28th. However, the sad part of this news is that Smart only offers this ICS device on their post-paid plans. We have no idea as of the moment if this will be offered as well for pre-paid users. 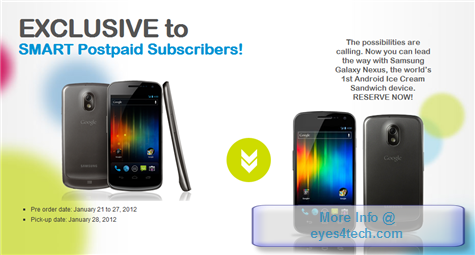 Android’s latest operating systems for Android-based smartphone is Ice Cream Sandwich and Samsung Galaxy Nexus is their flagship device for this.  This was introduced and launched sometime in the last quarter of year 2011 and became one of the hottest smartphones in the market – it’s because people are more into either iPhone 4S and Samsung Galaxy S II. Smart Communications didn’t divulged on which post paid plans will the Samsung Galaxy Nexus would fall but I have a hunch that it’ll be like on what’s being offered for iPhone 4S – All-In Plan 3500 or UnliData Plan 2000.

Here’s a little overview on Samsung Galaxy Nexus I9250 specs:

Unfortunately, when I checked again Smart’s website it looks like that the pre-order slots for Samsung Galaxy Nexus is all out and there’s no available units as of the moment.  But don’t be despair yet because the pre-order period is not over yet.  You just need to stay tune or better yet coordinate with any Smart mobile centers and check out with them.  You might be surprised that they have more available units compared to what’s being offered on their websites.