A clear sign from Sony itself that those who owns either Sony Xperia go, Xperia U or Xperia sola will be receiving the Ice Cream Sandwich (ICS) update soon. but of course it will depend on your country and mobile carrier. Nevertheless, it is still glad to hear that Sony made this step to update their smartphones. Apparently, Sony does not intend only to deliver the Android Ice Cream Sandwich update but with a little more addition to that – a few more added features and one of which is the “Glove Mode”. It does really fit with the coming of cold seasons if you can get to know what does this feature can give you. Do take note that this “Glove Mode” was made for Xperia sola only but hopefully Sony could find a way to push the same feature on their other Xperia smartphones. 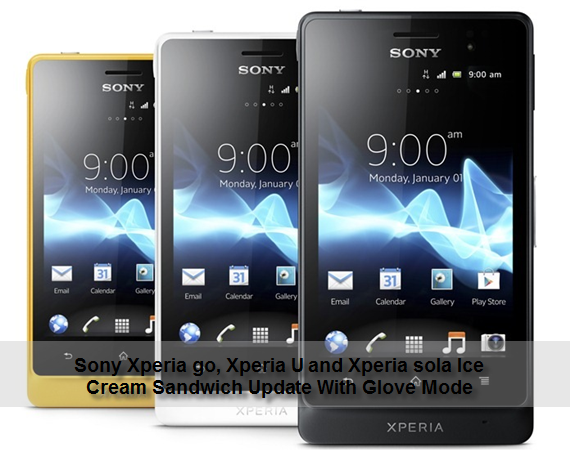 What does the new Ice Cream Sandwich update will bring into Sony Xperia go, Xperia U and Xperia sola smartphones that we are not aware of?  According to Sony’s update, the new upgrade/update includes:

The “Glove Mode” feature, by the name itself I think it’s already pretty obvious to you now on what can it do for the users.  In layman’s term, it enables the Xperia Sola to use their touchscreen smartphones even with a glove on their hands. So instead of you removing your gloves in the middle of a cold weather just to access your smartphone, you can do it now with your gloves on.  Here’s a video from Sony to give you a more illustrative idea of how it works.