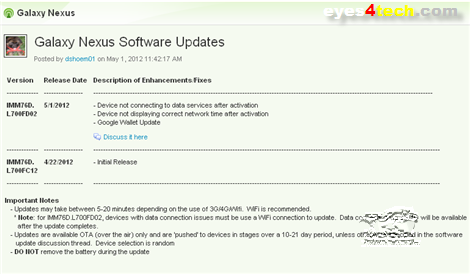 The Sprint Galaxy Nexus software update IMM76D.L700FD02 is the immediate fix for the following issues or problems found previously with the said handset. One of the problems addressed here is the problem with the handset’s inability to connect to the data services after it has been activated. Another one is that the handset is not displaying the correct or appropriate network time after the activation and a little bonus is that there’s an update for the Google Wallet.  These are the main content of the software update that you are to receive from Sprint.

If you want to install this software update, you can check Sprint Community website and follow the steps there on how to update your Samsung Galaxy Nexus.  Reports says that this same update will also be available in all Sprint Retail Stores on the 17th of May so if you want to wait just to be certain, you can do so.

Next Post The ‘Next’ Samsung Galaxy S To Be Revealed Today