In a few hours from now, 03rd of May 2012 at exactly 07PM GMT, we will all witness the latest and most awaited “hyped” smartphone from Samsung as they unveil the next Samsung Galaxy S on their Samsung Mobile Unpacked 2012. The event will be held at Earls Court Exhibition Centre, London. Finally, we can all put a stop and get the most valid and most accurate with complete information about this next Galaxy S smartphone from Samsung. Since the day where Samsung said that they will be launching a new smartphone for all of the tech-consumers, we’ve seen so many news and rumors about it. Some of them looks real while some were so unbelievably true to accept. Today, as I opened my Inbox, I was reminded by Samsung that the main event is so close. 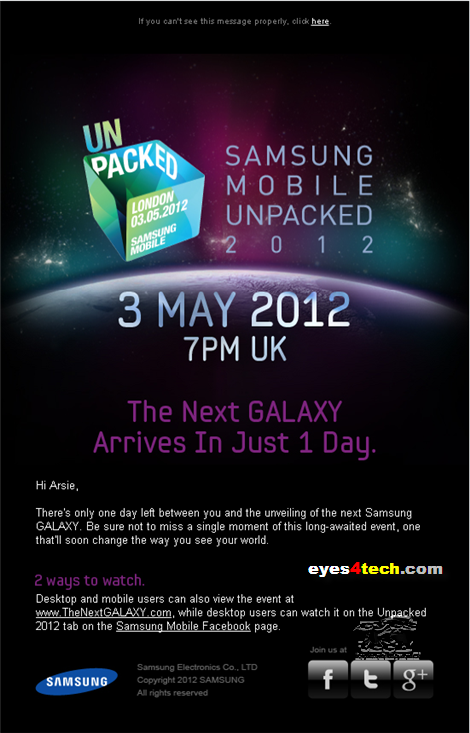 Almost all of the tech-consumers are hoping that the Samsung Mobile Unpacked 2012 will reveal the next Samsung Galaxy S III or the latest and most awaited iteration of Samsung Galaxy S. Well, hopefully it is the one that we’ve been all expecting and waiting for. If this happens, it will now break all of those rumors we’ve seen and heard before about this hyped next Samsung Galaxy S (III, if ever).

The only thing which is clear for us about the next Samsung Galaxy S is that it will sport the Exynos 4 chip, a quad-core processor running at 1.4GHz. Others are rumors like the camera, screen display, and many more. I am expecting that this latest smartphone would use the latest Android OS Ice Cream Sandwich – I sure do hope so.