Exclusive! Fresh and hot!  I got a report yesterday from one of my readers that the download link of Pinoy Henyo for Android is no longer and it doesn’t exist anymore in the Android Market.  I checked it out and found out that it is indeed no longer in the Android Market. So where is it now?  Although I have a softcopy of this game, I sent the author of the game, Alfred M. Ocon a.k.a. kaizenbrew,  an email asking for the game he created instead.  While waiting for his answer I went back to the Android Market and searched for his developer’s name instead and found his latest Android game app “Are you the brighTTest?“.  I downloaded it on my Samsung Galaxy S II and checked it out. Indeed this is the new Pinoy Henyo game app for Android.  So what happened and why did he changed the name of this top free Android game app to “Are you the brighTTest?”? 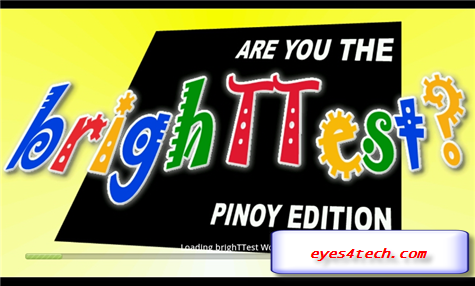 While checking on the updated version of Pinoy Henyo game app, Alfred answered back to my email and he confirmed that the popular Pinoy Game – Pinoy Henyo for Android – is no longer in the Android Market.  He recreated the Android app and named it “Are you the brighTTest?“.  The game is pretty much the same with some modifications and enhancements to the game.  I am still in the process of interviewing Alfred asking him some more questions about the game.

I will update this post in a few hours after I’ve completed my discussion with Alfred also known as KAIZENBREW.  While I am doing that, you can now download “Are you the brighTTest?” the Pinoy Henyo Android game app for your smartphones.

I am almost done with my conversation with Alfred Ocon of Kaizenbew and yes it’s confirmed that there had been issues with the popular Android game app “Pinoy Henyo” in terms of trademark and below is the last email I got from him and the what’s new with the newest all Pinoy Android game app – Are you the brighTTest?. Another good news that you may want to know is that they are now developing the same popular game for iDevices and right now the same game is currently in progress and should work on iPhone – stay tuned!
[/information]

It looks like that this Android app has been removed again from the Android Market.  I am trying to contact now the developer for any updates but I haven’t seen any updates from yet.