ASUS United Kingdom announced yesterday that they have delivered the firmware udpate for Transformer TF201 Prime owners in the UK.  The firmware update was the latest OTA firmware for ASUS Transformer TF201 Prime and it was announced through ASUS United Kingdom’s official Facebook fan page. ASUS Transformer TF201 sports Android™ 4.0 Ice Cream Sandwich OS with Adobe® Flash® support and not to mentioned its elegant metallic finishing design. Also you will love that NVIDIA® Tegra® 3 Quad-core processor for your multi-tasking activities. Not to mention its QWERTY keyboard with its own touchpad and USB port support – making your slated device to look like a thin and sleek designed notebook. 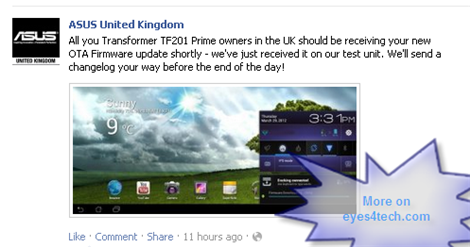 The announcement on ASUS UK Facebook fan page says that Transformer Prime TF201 users in the UK should be getting the latest ICS firmware update via OTA (over-the-air). This means that if you are an ASUS Transformer Prime TF201 users then you can update it by activating your Wi-Fi connection and update your slated device through your Settings menu.

Unlike the other OEM companies who develops the Android 4.0 Ice Cream Sandwich updates, they put so much efforts to optimize their Home screen and other software. Whereas with this update from ASUS focus on optimizing their firmware giving more support on hardware.

The ASUS Transformer Prime TF201 firmware update will now enable users to improve their lockscreen by adding notifications, also they will now be able to connect to the Ethernet through USB – that is if you have an adapter. Another added upgrade is the support for wireless ad hoc mode.

Here are some of the screenshots courtesy of ASUS United Kingdom entailing the firmware update.