If you recall or if you are still ain’t aware, Mark Zuckerberg introduced Facebook Timeline last September 2011 during the F8 Conference and soon after that is the developers’ option to try the BETA release of Timeline.  And Facebook started implementing this officially this December 2011 – although Facebook (for now) kept is as an option for the end-users to give way whether they want to turn on their Facebook Timeline now, or activate it some other time or not at all.

Common Social Media Mistakes That Will Affect Your Brand

Well about that question on how to disable Facebook Timeline, it’s actually a trick and not a permanent solution for those who are looking to disable the new feature forever.  But if you really don’t fancy the new Facebook Timeline and you don’t want to see it even from your friends’ profile then here are the tricks you can apply.

The trick lies behind the browser’s user-agent and to make it simpler for you to understand, Facebook’s features does not or stopped its development to be compatible with the old version of Internet Explorer and to be more specific Internet Explorer 7 and below.  This simply means that if you are still using the old Internet Explorer version 7 then definitely you won’t see the Facebook Timeline.  So with this, the idea of this trick is to alter your web browser’s user-agent so that Facebook would think that you’re still using the old web browser version even if you’re using the latest.

So how do we do that?

I will start by providing first some information and online tools that we’ll need and I will make use of Google Chrome for this first example.  I am currently using the latest version of Google Chrome for Windows XP – v16.0.912.63 m. You can check your user-agent from this site User Agent String (just click the link and you’ll see the user-agent of your browser).  The image below is the example result:

Now that you’ve seen that and you now have an idea, the next question is “How do I change my browser’s user-agent?” The answer is we just need to add an additional command to our Google Chrome’s shortcut so that we can change the user-agent to an old version of Internet Explorer -in my case I will change it back to IE7.

2. Now that we have the user-agent we need, locate your Google Chrome’s shortcut from your desktop or from the Start menu;

3. Right-click the shortcut and then click on Properties (see sample image below): 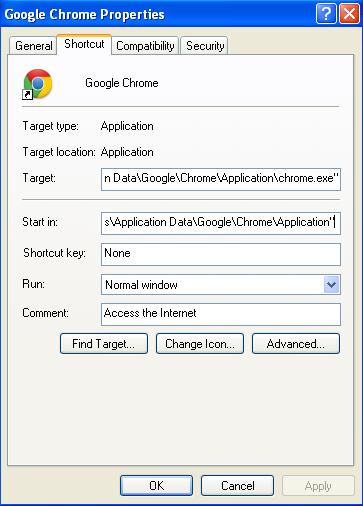 4. Now, we need to alter the Target by adding the user-agent option.  Normally the value of Target is

I will now alter the value to:

Notice that I’ve added the command after the chrome.exe.:

6. With this change, once you open your Google Chrome and went back to Facebook you will no longer see your Facebook Timeline.  First check again your User-agent, check the image below after I altered my shortcut.

The Facebook Timeline is now disabled BUT there is still a problem.  Although I can no longer see Timeline on my own profile or even from my friends’ profile there’s a big and long white space between the header and the main content:

Now to resolve this dilemma, we now need the aid of an addon or plugin to fix all the UI or display issues and this is the so-called F.B. Purity.

2. After installation then you have to restart your browser;

4. Then hit F5 to refresh your browser – Viola!

Again, to fix those UI problems you need to get the FB Purity (check the link from Chrome above).

As for Safari web browser users.

1. Open your Safari browser, then click the wheel button from the right side and then Preferences and then go to Advanced tab – tick the Show Develop menu in menu bar.  Then close it; 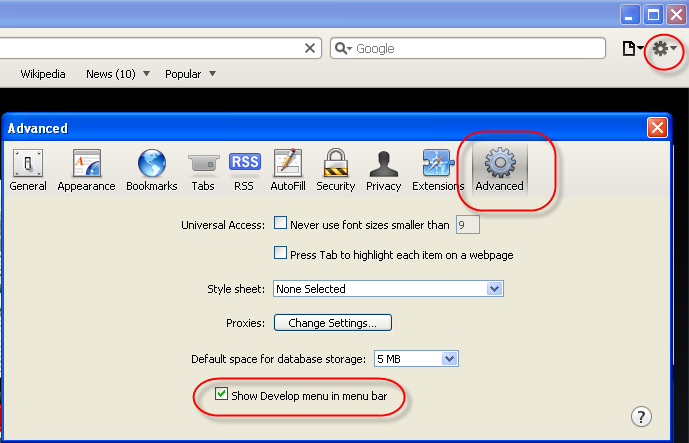 2. Then beside that wheel menu, click that paper-thing button

3. Then login to your Facebook and that’s it.  Again as stated above, you need to install the FB purity plugin for Safari to fix the UI issues.

There’s one problem now although it’s only small but it can become quite tedious.  Setting your browser’s user-agent may cause you not to view properly other websites which were developed and intended for new versions of browsers.  Try going to any other websites like on your GMAIL or Yahoo account.  You’ll see that the orientation will look like as if you’re really using an old browser version.  Now to fix this, all you have to do is revert the changes made and hit on refresh.

Well, as for me all I can say is I am not saying that I am not enjoying the new Facebook Timeline but I also don’t really care if I still have the old version.  What is more important for me is my connection and the means for me to communicate with my friends.