Last week almost all smartphone users in the US had a common complaint after Trevor Eckhart, a 25-year old developer/researcher exposed a software called Carrier IQ or known as CIQ embedded on most modern Android, Blackberry and Nokia devices. Trevor says that Carrier IQ was evidently seen pre-installed on most of the mentioned devices and as a proof he released a document and a video (two parts) showing us all the found software on his HTC device – categorized as rootkit, other can call it malware or you can say a spy ware on your mobile phone. The management of Carrier IQ defended themselves and released an official statement that they only acted as an agent for the carriers such as AT&T, and Verizon as well as with mobile manufacturers like Nokia, Google, RIM, HTC and many more. Nevertheless, the real question here by most of the smartphone users is – “Why such software lurks on my smartphone and sends out information to other people without my knowledge?” 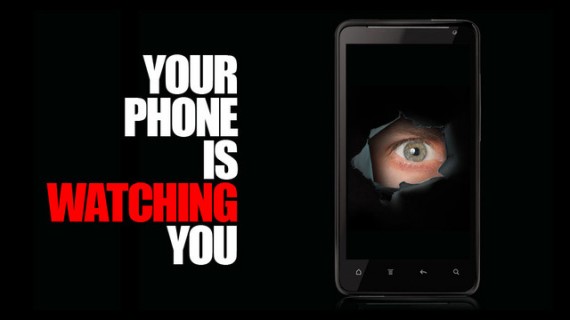 I’ll give you a little insight or at least a brief background of the application named Carrier IQ and what does it really do on our smartphone.  Carrier IQ is a legitimate company that provides mobile service intelligence solutions – meaning they provide applications that analyzes data from your mobile phones and will give the company or the person who requested for that data a unique information, quality and behavior of your mobile phone.  Although the intention is “possibly” good for the carriers or providers for them to monitor their products like the quality of their signal, quality of their phone, how the battery is performing and other stuffs that may relate to their products; there’s still a BIG risk and the question is still there – have they ever heard or even understand the meaning of the word “privacy”?  As mentioned before, this application are pre-installed which means it was already there from the very beginning and without the end-user’s knowledge all the information that they’re doing with their phone is being sent to their providers.

To know more about Carrier IQ which was documented by Trevor, you can visit his work at the following links:

So which smartphone does have Carrier IQ pre-installed? When Trevor disclosed this information, Carrier IQ was evidently found first on HTC Android smartphones, but later it was also found in other Android smartphones, Blackberry, and Nokia handsets. Soon after that, a well-known iPhone hacker Chpwn (known for developing iPhone jailbreaks apps) said that Carrier IQ was already on iPhone handsets since it’s OS 3.1.3 and up until with the latest iOS 5. But the good news about the Carrier IQ on iPhone is it does not transmit any information unless the iPhone is in Diagnostic mode and also by default the DiagnosticsAllowed setting is set to OFF – so no data will be collected or transmitted. But just to be sure, to turn off the Carrier IQ on your iPhone just tap Settings inside your iPhone and then tap on Diagnostic and Usage and tap “Don’t send” so as not to send any information outside your knowledge.

So how about Android smartphone users? How can they check if they have Carrier IQ installed on their smartphone? To tell you frankly, to check if this Carrier IQ application lurks on your smartphone is easy with the latest Android application released by Lookout Labs (a company who develops antivirus for Android devices and the same group who created Dreamdroid Cleaner) named Carrier IQ Detector .  However, it is not possible for this application to turn off or delete the Carrier IQ application on your Android smartphone.  It can only alert you that the application resides on your phone and it is currently active.  I installed it and tried it on my SGS2 or Samsung Galaxy S II and I felt relieved after seeing that my smartphone turns out negative from being affected by this accused malware by most users.

Here are some of the screen captures from my Samsung Galaxy S II showing that it’s clear from Carrier IQ: 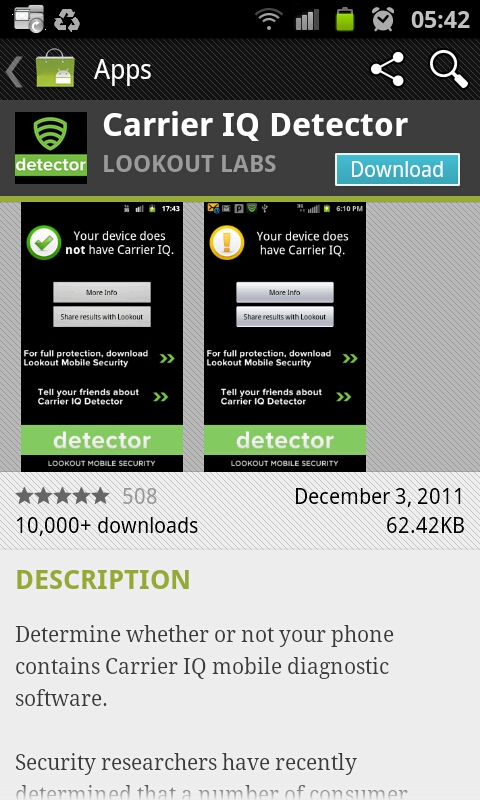 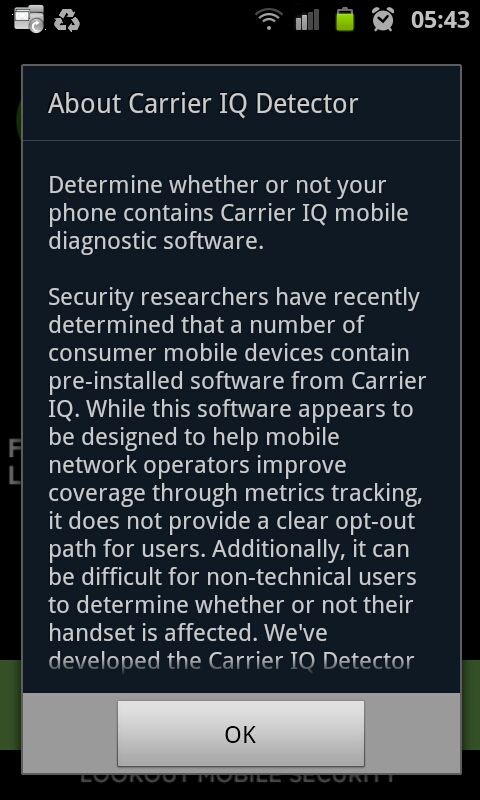 For Android smartphone users, there’s actually a long shot to remove Carrier IQ on your smartphone but it will require you to root your mobile device so that you could acquire the needed permission for you to access some core files and actually delete it. It’s not advisable though if you are not experienced or if you don’t know how to do it. But if you insist, you can Google it and I am sure there are well-known forum and websites that offers tutorials on how to flush and root specific Android smartphones. But there’s a possibility that once you do this, it will be hard for you to acquire future automatic updates from your carrier or providers since your smartphone has been modded. The best advise is for you to bring it to your retailer or provider and tell them to remove it at least you’d still have the warranty for your smartphone.

If you ask me, I think this Carrier IQ only affects and pre-installed on countries or regions like in the US and UK.  Probably the main reason is for their provider such as AT&T and Verizon to get substantial data from their end-users so that they could provide better service in the future.  Furthermore, if I compare it here in the Philippines I don’t think this is pre-installed on unlocked Android smartphones and iPhones since the probability of one end-user having multiple SIM pack is high so it will be useless for companies like GLOBE and SMART to acquire this software – besides the ratio of people using pre-paid SIM pack is higher than those with post-paid subscription plans so this means that for sure these companies won’t be able to get “substantial” information.

Would you consider this move made by most of the carriers in the US is acceptable? If you knew that you’ve been affected by this, would you feel violated as well?