@SamsungMobileME, the official Samsung Mobile twitter account of Saudi Arabia have tweeted something late last week that made all their followers wondered and amazed. This is all because in the tweet they made, Samsung Galaxy Note 2 was mentioned. This announcement by our friends in Samsung Mobile Saudi seems real since Samsung’s main headquarters didn’t commented nor asked the aforementioned to remove the message. If there’s something’s not right or the PR isn’t true, Samsung will surely asked the owner to remove or correct the information like what happened before here in the Philippines.  And it was said that the next Samsung Galaxy Note 2 will be showcased in the next IFA event that will take place in Berlin. 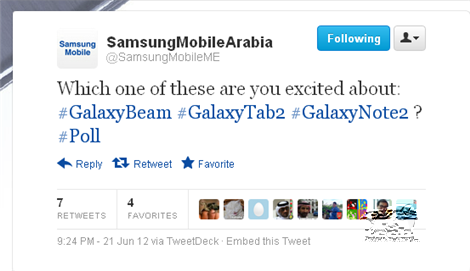 It isn’t really impossible for Samsung to release one of the most awaited new member of the Samsung Galaxy line-up – Galaxy Note 2. Since the sales of the recent released phablet (smartphone + tablet) wasn’t bad at all. And it was also included in the Top Popular Smartphones in the UK.  So my hunch that this report is indeed true and soon we’ll be seeing the next and new Samsung Galaxy Note 2.

However, there’s no concrete data nor details about the specifications of Samsung Galaxy Note 2. We only have heard the rumors from our neighboring country, Korea, where they published a report of what to expect from this next galaxy Note 2.  According to the report published, Samsung Galaxy Note 2 will sport the most awaited new operating system from Android – Android 4.2/5.0 Jelly Bean. Also, the new smartphone will be using a 5.3-inches display screen and of course will run on quad-core processor. Nothing is written in stones yet and soon we will be hearing more about this new Samsung Galaxy Note 2.