Samsung Galaxy Note II release date for T-Mobile in the US leaked out and according to the reports it will be announced sometime on the 24th of October. Thanks to TMONews, they provided the leaked release date with a screenshot. And coinciding this date, there will be a separate press release from Samsung.  Most of the Android lovers in the US are already looking forward into these events and they have one thing in common – Galaxy S Note II. On the same day, as mentioned Samsung will be holding an event in New York and no doubt that it is more likely the release of Samsung Galaxy Note II focusing on the state side. The expectation from Samsung Mobile’s head JK Shin is that they are looking into selling their phablet more aggressively as compared to its predecessor. The numbers JK Shin projected is around 128 markets and 260 operators which includes five of the most known mobile carriers in the US – T-Mobile is one of the mentioned carriers. 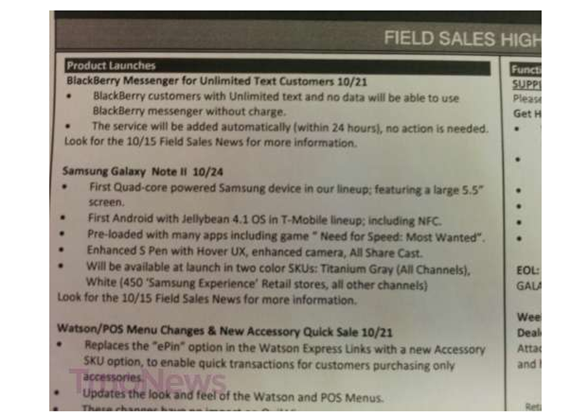 Samsung Galaxy Note II with S-Pen runs on Jelly Bean Android operating system and the first quad-core smartphone they have for their device known as “phablet”. On the date mentioned above, there will be two colors of Galaxy Note II which will be sold in the US. Consumers can pick either the Titanium Gray or White – it all depends now on the consumer’s  liking. But if you asked me, I wish there a black version of this device because for me that color is more elegant – it’s just me. I have previously posted the specifications and features of Samsung Galaxy Note and if you want to see it again you can check it out here.

There will more news to come about the Samsung Galaxy Note II release date. And from my point of view, with the rate Samsung is currently doing to boost their sales I think that their revenues will continue to rise before the end of this year. And come to think of it, their Samsung Galaxy S III is doing great and not to mention the upcoming Galaxy S III mini – well it’s up to you to guess and imagine how much they will earn. 🙂