Last December, there were news that came out that Verizon Wireless had this plan to launch an upgrade of LG Revolution which is now known as the LG Spectrum 4G and as scheduled (they said that LG Spectrum 4G will be available by first quarter of 2012) – and indeed they delivered it as promised.  Before the release, the news spread that the price of an LG Spectrum 4G would range from $249.00 – $299.00 with a 2-year contract.  Or it can be if at full retail, the price range will be from $569.00 – $649.00.  But this morning I spotted from Amazon this  LG Spectrum 4G Android Phone (Verizon Wireless) 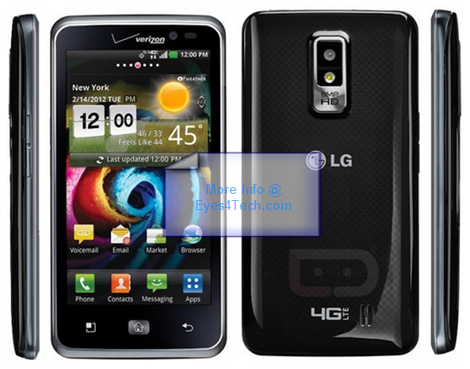 This is what I call a real deal, imagine a drop of from its regular listed price from Amazon.  But before you take a dive and decide to get your own LG Spectrum 4G, let’s take a peek on this smartphone’s features and specifications.  First of all, LG Spectrum is 4G LTE enabled and sports the Android Gingerbread (version 2.3) as its operating system.  The display is 4.5 inches True HD with a dual-core 1.5GHz processor.  The LG Spectrum 4G LTE has a dimension of 2.71 x 0.41. x 5.33 inches and weighs 4.96 ounces.  As for the network compatibility, it supports CDMA and GSM with Wireless-N Wifi network and a Bluetooth 3.0.  It can also serve as a WiFi hotspot from which you can share up to 10 concurrent connections.   And if you are wondering about the power of its camera – LG Spectrum 4G LTE sports an 8MP Full HD 1080 pixels on its rear and a front facing camera for video chatting. The memory specs is 4GB of on-board storage and 16GB micro SD card pre-installed.

With LG Spectrum 4G LTE’s price and specifications, I think it’s not that bad if you will get one for yourself or at least a perfect gift for this love month – a wonderful gift for this coming Valentine’s day for gadget lovers.

Here’s a review of LG Spectrum 4G LTE from theofficialGgirl on YouTube.